This Thursday, the Planning Commission will consider legislation to more than double the Jobs Housing Linkage Fee (“JHLF”) on both office and laboratory uses. The  Jobs Housing legislation is authored by Supervisor Matt Haney and co-sponsored by five other supervisors (Fewer, Ronen, Mar, Peskin, and Walton) who, together, comprise a majority of the Board of Supervisors.

The JHLF was first established in the 1980s and applies to commercial projects over 25,000 square feet. In May of this year, Supervisor Haney introduced legislation to increase the JHLF on office to $38.00 per square foot, an approximate $10 increase over the current rate. Last week, Supervisor Haney modified the legislation to propose an office rate of $69.60 per square foot and a rate of $46.43 per square foot of lab space. A comparison of current and proposed rates follows:

The legislation does not include grandfathering for pipeline projects. For most projects, the higher fee would be collected at the “first construction document” (usually a building permit or foundation addendum to a site permit) for a project. However, the higher fee could also be retroactively collected from projects with issued permits if they were approved by the Planning Commission or Department before the end of 2019 with a condition that they would be subject to a higher JHLF. Prior to receiving a Certificate of Occupancy, these projects would be required to pay the difference between any fee assessed at site permit issuance and the higher fee effective when the Certificate of Occupancy is issued.

The Planning Department has expressed its support for “the overarching aim of the Ordinance” to generate funding for affordable housing, but expressed strong concerns about the proposed rates:

“Imposing development impact fee rates above those found feasible would postpone or halt the construction of a Development Project. Any public benefit revenue or public improvements that were expected from such projects would not materialize and would necessarily be postponed or abandoned until such time as market conditions or policy changes make the rates feasible…[H]undreds of millions of dollars’ worth of public recreation and open space projects, pedestrian and bicycle safety improvements, cultural preservation, and affordable housing would not materialize with an infeasible rate.”

Planning staff recommends setting the rate for office uses no higher than $38.57 per square foot “in accordance with feasibility assessments” prepared by the city’s consultants earlier this year. Because those assessments did not include an analysis of laboratory uses, Planning staff “cannot recommend increasing rates for this use.”

In fact, the feasibility assessment prepared for the City concluded that “[n]one of the tested office prototypes appears financially feasible based on current market conditions.” A combination of construction and land costs, along with other newly imposed community benefit costs, including impact fees, special “community facilities” taxes, and Prop. C commercial rent taxes, have added to the overall cost burden. Further fee increases only became feasible when a hypothetical 25 percent reduction in land value and construction cost were factored in, along with a hypothetical 13 percent increase in rent. With those assumptions, three of six prototypes are thought to be feasible with a $5/gsf increase in the JHLF; only one of six would be feasible with a $10/gsf increase.

The Planning Commission will hear the legislation this Thursday afternoon in City Hall, Rm. 400. The agenda, including supporting documents for the JHLF legislation, is available here: https://sfplanning.org/sites/default/files/agendas/2019-09/20190919_cal.pdf.

Much has been written about the social ills facing the greater San Francisco Bay Area, what solutions have potential to make an impact, and to what extent the business community should be required to fund them.  Debate raged in advance of the November 2018 election, when approximately 61% of San Francisco voters passed a gross receipts tax on some businesses to fund homelessness and mental health services.  The arguments were revisited in June of 2018, when competing commercial rents tax measures were proposed to provide additional funds to housing and homeless services or fund childcare and early education.  The latter measure passed with approximately 50.87% of the vote.

The validity of both voter-initiated tax measures has been subject of litigation filed in the Superior Court for the City and County of San Francisco.  The actions claim that the initiatives cannot lawfully impose the special taxes because they received only a simple majority of the vote, in violation of the California Constitution’s requirement that taxes imposed by local governments receive a two-thirds supermajority.  The measures were also challenged under the San Francisco Charter.

On Friday, July 5, 2019, San Francisco Superior Court Judge Ethan P. Schulman upheld the validity of both initiatives, and determined that a simple majority of the vote was sufficient to support their passage.  The rulings are well summarized by the following comment from the order on the June 2018 measure:

the procedural two-thirds vote requirement . . . of the California Constitution that limit[s] the Board of Supervisors’ authority to impose new taxes does not apply to the voters’ initiative power, either directly under those provisions or indirectly under the San Francisco Charter.

The Court evaluated claims that the June 2018 measure was placed on the ballot by a member of the San Francisco Board of Supervisors in an effort to end-run the requirement of a supermajority vote.  The argument invited the Court to view the initiative as a legislative initiative rather than a voter initiative.  The Court rejected the arguments, based on a variety of earlier rulings regarding voter initiatives, including a 2017 decision by the California Supreme Court regarding an initiative that imposed licensing and inspection fees of medical marijuana dispensaries.  Similar analysis appears in the order regarding the November 2018 initiative.

Given the magnitude of the Court’s decisions, appeals are expected.

Coincidentally, the decision on the tax measures was issued on the same date on which the 2019 San Francisco Homeless Point-in-Time Count & Survey was released by the San Francisco Department of Homelessness and Supportive Housing.  The report concluded, that as of January 2019, there were over 8,000 homelessness people living in San Francisco, a 17% increase over the 2017 count, and a 14% increase between 2013 and 2019.”  It comments: “Unstable living conditions, poverty, housing scarcity, and many other issues often lead individuals to fall in and out of homelessness . . . [i.e.,] the experience of homelessness is part of a long and recurring history of housing instability.”  Although there has been suggestion that the survey actually undercounts the homeless population in San Francisco, there can be no question that homelessness is a problem that is getting worse.

There are myriad differences of opinion about how to address homelessness and other social ills facing San Francisco and other California jurisdictions.  However, the Court’s decision on the June 2018 and November 2018 tax measures will likely yield more efforts by state residents to tax the business community in an effort to fund possible solutions.

Commercial property owners should consider the financial risks associated with voter-initiated tax measures, and may wish to include provisions in their lease agreements that allow such special taxes to be passed through to commercial tenants as operating expenses.  As the characterization of such taxes continues to evolve – from payroll taxes, to gross receipts taxes, to commercial rent taxes – limited definitions of “operating expenses” may prevent property owners from recovering property-related expenses from commercial tenants, resulting in diminished property values.

Prior to 2013, the City of San Francisco (“City”) implemented an annual condo conversion lottery system for 2-6 unit residential and mixed-use properties. But with the lottery resulting in a backlog of applications extending well over a decade, the Board of Supervisors passed Ordinance No. 117-13, ushering in changes to Article 9 of the City’s Subdivision Code (San Francisco Subdivision Code, § 1300, et seq.) and temporarily supplanting the lottery system with an “Expedited Conversion” program (the “ECP”). The following summarizes the scope of the ECP, its current status, and what property owners hoping to accomplish a condo conversion should be prepared for in the coming years.

The ECP halted the conversion lottery program for a minimum of 10 years, and was intended to allow properties stuck in lottery purgatory to convert to condos over the course of a 7-year period. Under the ECP, the Department of Public Works was required to stop accepting and processing new condo conversion applications for properties that would otherwise be subject to the lottery. (Subdivision Code § 1396.5)

Controversially, the ECP also required applicants to offer binding, lifetime leases to all tenants who do not own the property in which they reside (“Tenants”), and included a poison pill that would essentially suspend the ECP in the event litigation were filed challenging the legality of the ECP. (Subdivision Code §§ 1396.4, 1396.5) In light of the lifetime lease provision, such a legal challenge was considered at the time to be a fait accompli.

Sure enough, in June 2017, a federal lawsuit was filed by San Francisco property owners against the City in the Northern District of California. The lawsuit, which challenges the constitutionality of the ECP’s lifetime lease provision, brought the vast majority of the ECP to an abrupt halt. This matter is now at the court of appeals, with no timeline for resolution.

As outlined by the Department of Public Works, the impacts of the ECP’s suspension for various categories of ECP applications are as follows: 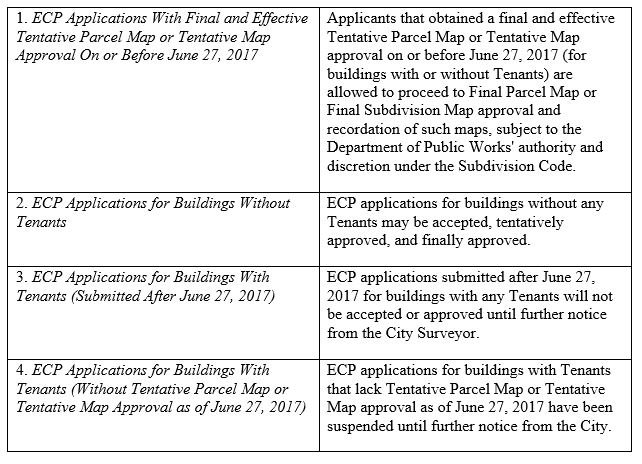 Notably, 2-unit, owner-occupied residential buildings are not subject to the ECP and may bypass the lottery system altogether. With regard to such properties, when the separate owners of each unit have occupied the building for at least 1 year they may submit an application for condo conversion. More information for 2-unit, owner-occupied condo conversions can be found at the Department of Public Works’s website (Residential Condominium Conversion Application Materials & Two Unit Owner Occupied Conversions).

Barring further changes approved by the Board of Supervisors or court action, the Department of Public Works will not begin accepting new condo conversion applications, nor conduct a condo conversion lottery, until at least 2024. Yet again, local property owners are left to the mercy of the City and court system to determine their property rights.