Later this summer, Oakland will be releasing its draft Downtown Oakland Specific Plan (the “Plan”).  A preliminary draft plan was released earlier this year (which can be accessed here).  The preliminary draft is the initial version of the draft Plan.  The Plan presents Oakland’s transformative ideas and recommendations for the future development of the downtown area.  The Plan encompasses approximately 850 acres, and is generally bounded by 27th Street to the north, I-980, Brush and Market Streets to the west, Embarcadero and Jack London estuary waterfront to the south, and Lake Merritt and Channel to the east. 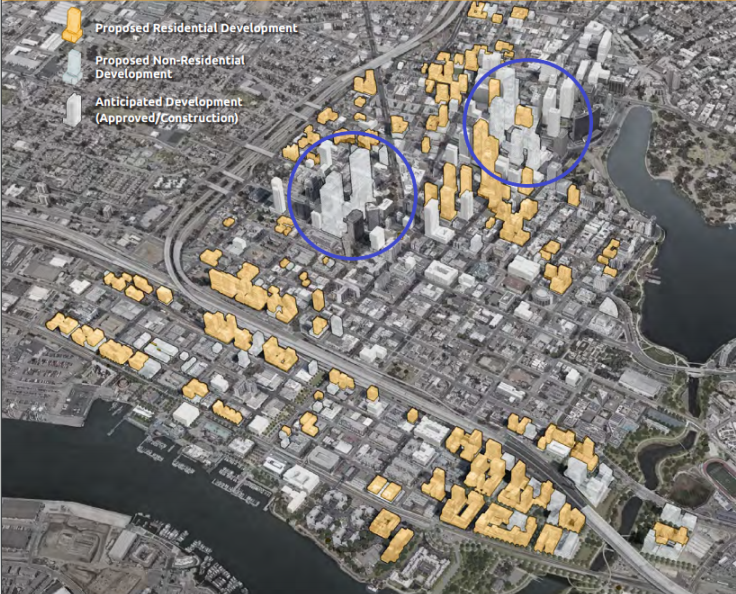 Before digging into the details, a quick rundown of the Plan’s projections for development through 2040 is as follows:

The Plan calls for creation of a carefully calibrated bonus incentive program. The program is to have clearly identified benefits provided in exchange for increase in intensity that can be applied to mixed-use projects of any size.

The pre-determined community benefits program will be developed in partnership with the community. The program will establish a finite number of consistent, pre-defined project requirements based on the Plan’s goals. The increased intensity allowed can be in the form of increased height, floor area ratio limits, or increased density provisions (to encourage micro-units and other affordable-by-design residential unit types).

The community benefits program is still being developed. However, three options for priority benefits have been preliminarily identified: (1) affordable arts and maker space; (2) parks and open space; and (3) affordable commercial (including community-serving nonprofit)/neighborhood retail.

The Plan identifies “development opportunity sites” for new development downtown. Sites that meet one or more of the following criteria are considered “opportunity sites:” (1) land/improvements ratio < 0.25 (this ratio is the value of improvements divided by the total value of the property); (2) re-developable existing uses (i.e., parking, vacant, auto-related, low-rise commercial); or (3) minimum lot size of 30,000 sf. “Opportunity sites” are eligible to participate in the pre-determined community benefits program discussed above.

The Plan recognizes increasing floor area ratio will make it possible to develop iconic skyscrapers in key locations, such as near the 12th Street and 19th Street BART Stations.

The Plan proposes generation of 29,077 new residential units. With the creation of approximately 55,000 new jobs, the Plan has an approximate 1.9 jobs:housing ratio. Assuming this residential development potential is reached, approximately $639.7M in impact fees for affordable housing would be generated.

Of the new residential units, approximately 4,320 – 7,250 units are projected to be affordable housing. This would be a significant increase in affordable housing provided compared to the what was produced from 2015 through 2017, which totaled 492 affordable units out of the 7,176 new units.

The Plan calls for establishing a “Green Loop.” The “Green Loop” will provide an integrated system of walking and biking paths though downtown. It will link cultural districts, and connect people to the Lake Merritt and Estuary waterfronts as well as to adjacent neighborhoods and districts. The “Green Loop” is proposed to extend along 20th Street to the north, Lake Merritt and Channel to the east, Embarcadero and Jack London estuary waterfront to the south, and Martin Luther King, Jr. Way to the west.

As part of an effort to promote a transit-oriented development strategy for Downtown Oakland, the Plan includes the following strategies:

The Plan seeks to leverage and protect Oakland’s diverse cultures as an engine for artistic innovation and economic growth by establishing and implementing cultural districts. Four cultural districts are proposed by the Plan:

The cultural districts would have special zoning and land use regulations to preserve arts and culture, including:

The Plan is projected to be released later this summer along with a draft environmental impact report. The Planning Department is currently targeting Plan approval and implementation by the end of 2020. Additional information about the Plan is available on the Planning Department’s website at https://www.oaklandca.gov/topics/downtown-oakland-specific-plan